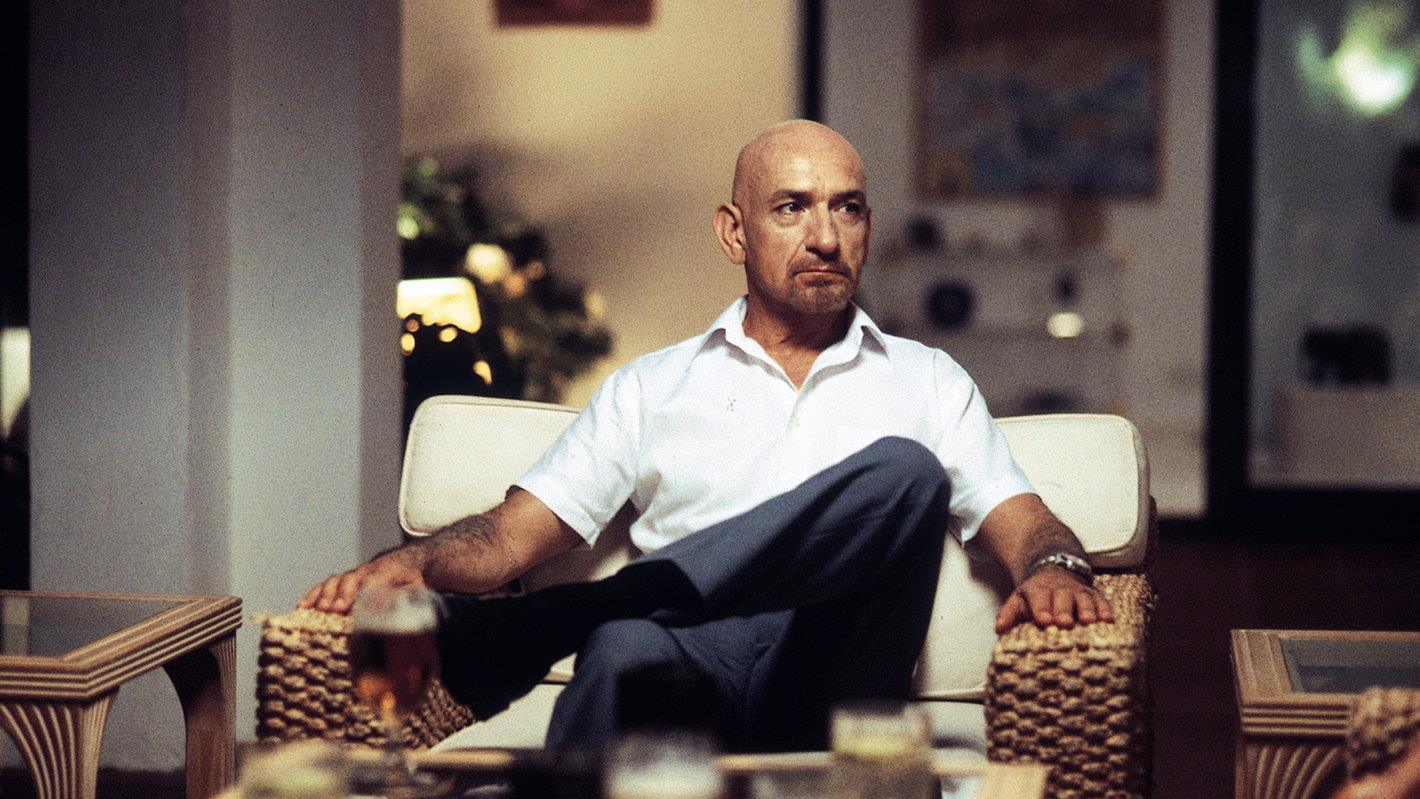 Gal wants no part in the job, setting the scene for a gradually escalating series of confrontations between he and Logan, who simply will not take no for an answer. Logan’s attempts to bully Gal to take part in the job start humourlessly enough but soon escalate, first in a wave of expletive laden threats, then rehashing the sordid underworld pasts of Deedee and Jackie. Finally, he resorts to violence, glassing Gal. Before Logan can do any more violence, Deedee shoots him, unleashing a wave of pent up anger on the part of her, Aitch and Jackie, in which all three beat him to death.

The film’s director, Jonathan Glazer, doesn’t give all this away in a linear fashion, however. Before we find out Logan has been killed, we see Gal in grey, rain sodden London, apparently brow beaten into taking part in the robbery, which involves breaking into a bank vault from an adjoining men’s bath house. Gal goes through the motions, but is clearly an unenthusiastic player. He is also aware of being under suspicion from Bass for Logan’s mysterious disappearance.

Sexy Beast deserves a place in this canon while at the same time wonderfully subverting it. The heist in Sexy Beast goes right and it is everything leading up to it that goes to shit. Rather than the usual story of the cunning, hungry working class man (and it is usually a man), climbing his way up the criminal ladder, Gal has long gone to seed and wants nothing to do with the proposed criminal job.

Sexy Beast presents crime in a totally unglamorous light. Instead of a rakish, sartorial gangster, we have Logan in his slacks and white shirt short sleeved shirt, a sexually frustrated, a-social, racist introvert whose only to deal with conflict and negotiate difference is verbal abuse or violence.

Interestingly, the underworld lives of the women are central; Deedee, who made her name starring in old blue movies produced by Maltese pornographers, and Jackie, who it is suggested got by as a consort to various gangsters including, at one time, Logan. Both women have come to Spain to get as far away from their previous underworld selves as possible and it is Logan’s act of bringing up their past which ultimately triggers their violent retribution against him.

At its best, the British gangster film has not only delivered thrills, it has also charted shifting social mores and class politics of Britain; whether it be the start of the swinging sixties in The Criminal, or Thatcherism and the country’s political lurch to the right as epitomised by Bob Hoskin’s career defining turn as the upwardly mobile Tory gangster as entrepreneur, Harold Shand in The Long Good Friday.

Every single British gangster film since Sexy Beast has been a tired rehashing of the so-called heyday of the British gangster film. I include in this category Gangster No 1 (2000), Layer Cake (2004), and the wave of imitation films made in the wake of Guy Ritchie’s Lock, Stock and Two Smoking Barrels (1998) and Snatch (2000), the latter of which are entertaining enough, but are largely pastiches, an homage to Britain’s so-called lost underworld culture, even including actors from key gangster movies of the seventies, like Alan Ford.

It takes more than violence, interspersed with a bit of old school criminal slang, a sunken lounge here and there, some shag pile and a few artfully placed Tretchikoff prints to make a good crime film.