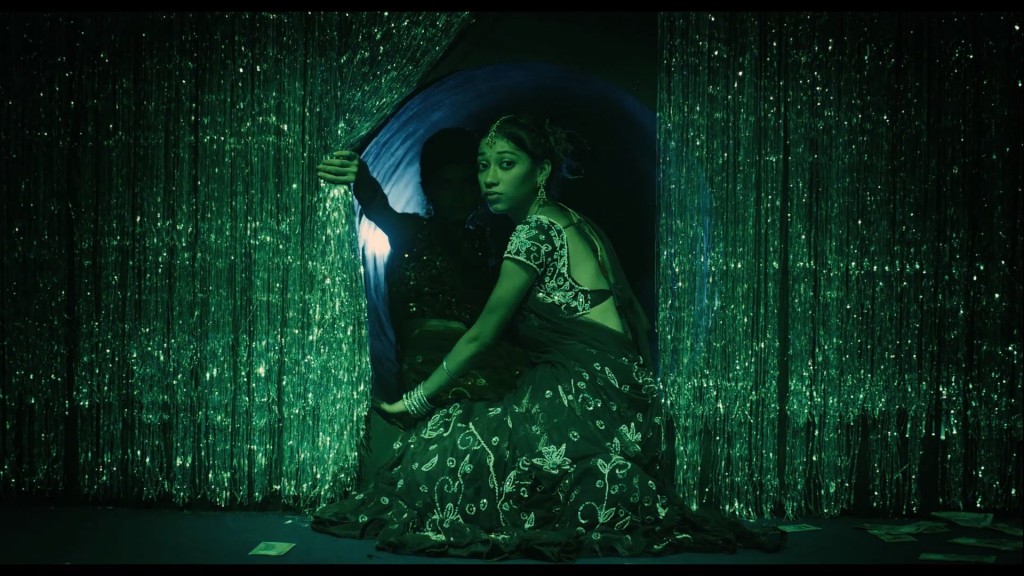 Joshi spends his nights obsessively searching for Aruna. He thinks he sees her everywhere. One night he stumbles out of the torrential monsoon rain into a nightclub called Paradise. Through the crowd Joshi spies Aruna amongst a group of young girls dancing on stage. Is it Aruna or have Joshi’s reality and his dreams merged until he can’t tell the difference?

Interspersed with Joshi’s story are scenes told from the perspective of the girls from the Paradise club. They live as prisoners in a small apartment and are allowed out only to work at the club where they are frequently sexually and physically abused. The older girl who may or may not be Joshi’s daughter is a leader of sorts and befriends the newest arrival, a very young girl.

The only trace of a sunrise in this entire film is in Joshi’s imagination. Virtually the entire story takes place at night amid continuous rain. This was not the director’s original intent but occurred when delays pushed the shooting schedule back into the monsoon season. Whatever the case, it works in creating a hellishly bleak noir atmosphere.

The central narrative, a man looking for a child that for whatever reason has disappeared, is a powerful if not especially original trope. It has featured in numerous films, including John Ford’s 1956 classic, The Searchers, Paul Schrader’s Hardcore (1979) and more recently Taken (2008), just to name a few that spring to mind.

While the basic plot of Sunrise may feel predictable, it also mirrors aspects of reality. According to a statement on the screen at the end of the film, a hundred thousand children go missing in India each year. As a young child in India, the now Sydney based director nearly became one of them when he was the victim of unsuccessful kidnap attempt.

Sunrise is a terrifically atmospheric film with a somewhat obvious plot that does not entirely work. But, as I started this review by asking, is it possible to make an entertaining neo noir crime film that is both engaging and entertaining, if such a topic can be, as well as a serious story? How does a genre film make sense of this reality and depict on the screen in a way that avoids being either didactic or sensationalist?

I don’t know what the answers are. The best compliment I can pay to Sunrise, and a reason why it is worth seeing, is that it is still very much on my mind the day after and, I suspect, will be for some time.