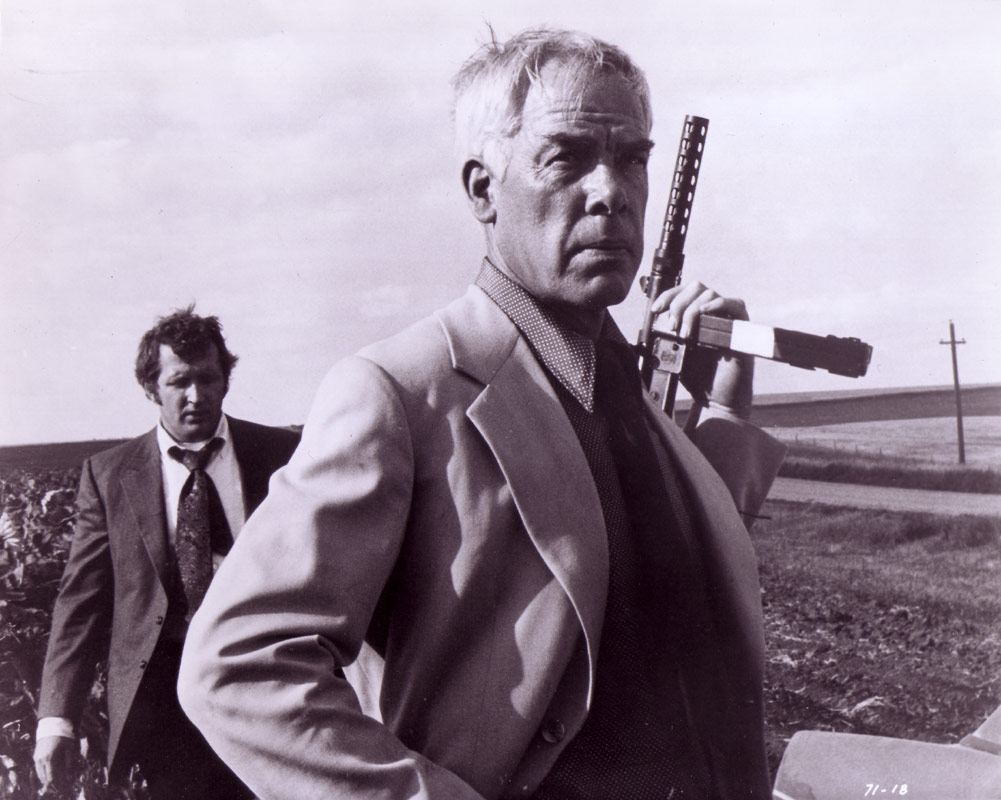 One of the girls, Poppy (Spacek), manages to ask for help through her drug haze. Marvin takes her ‘on credit’ and leaves, after getting Mary Ann’s agreement to meet him next day and hand over the money.

Describing what happens next is not so important, given the over the top, weird, at times surreal nature of the story and fact that so much is unexplained.

The film makes no attempt to explore how Mary Ann amassed such a huge debt or the origins of the obvious animosity between he and Devlin. Ditto, no detail is provided on the previous relationship between Devlin and Mary Ann’s scheming, platinum blonde trophy wife, Clarabelle (Angel Tompkins).

Suffice to say, the money exchange doesn’t go down as planned leaving Devlin with no choice but to take Mary Ann’s organisation apart piece by piece. Nothing unusual in any of that. But amidst the action there are some truly wonderful touches and themes.

The opening credits show cattle being brought to a slaughterhouse, killed and made into sausages. Lalo Schifrin did the score, and used elevator muzak overlayed with the sound of a meat saw cutting through bone. It’s pretty disturbing, especially when a tall, muscular man (‘Weenie’, Mary Ann’s brother), interrupts the operation of the sausage making machine with a “special order”, the disposal of the most recent group of debt collectors dispatched by the mob. They are made into sausages and mailed to their bosses in Chicago.

This is by no means Marvin’s best role (that gong would go to Point Blank or The Dirty Dozen). Indeed, it feels as if he’s almost doing the role on autopilot. It doesn’t matter, from the moment we lay eyes on him downing boiler makers in a Chicago bar and eying off the mob boss’s girl friend, its classic Marvin, a mixture of quiet tough guy intensity and wry humour.

Prime Cut was Spacek’s first major screen role, and her performance shifts between doe eyed ingénue and avenging angel. In one of the film’s best scenes, she accompanies Devlin to dinner at the best restaurant in Kansas City, clad only in a see through green dress. As the rest of the clientele, Kansas City’s finest, look on, she tells Devlin about how she came to be Mary Ann’s captive. Given the content, it’s a strangely asexual scene, the relationship between the two more like father and daughter than anything else.

After the money exchange goes bad, Devlin and Poppy are forced to flee through a huge wheat field, where one of Mary Ann’s soldiers chase them with giant combine harvester. If you,ve ever wondered what would come off best in an encounter between a combine harvester and a speeding car, this is your chance to find out.

Kansas is depicted as a nightmare version of American Gothic, a corrupt, all white kingdom presided over by Mary Ann and his army of blond haired, shot gun wielding young men dressed uniformly in denim overalls. The backdrops for the action include country fairs and vast expanses of wheat and sunflowers. There are also some terrific locations in early seventies Kansas City, including the half-way house for derelicts and piss bums, where Weenie lives.

Fresh from The French Connection the previous year, Hackman plays Mary Ann with a sense of playful malevolence, like a bent Republican politican spruiking the virtues of the all-American heartland. Between mouthfuls of offal, he tells Devlin  “Chicago is crumbling. Nothing left there but kids and old men. What hasn’t been burned down has been picked over.”

Devlin and his men make absolutely no concession to the bizarre rural landscape and their role as outsiders in it. Devlin smokes cigars, wears only a grey suit and white shoes, while his men are clad in black. They cruise around in a giant black Cadillac and stay in the best hotel in town. I couldn’t help but make an analogy with the Vietnam War, which was raging at the time. Marvin and his men are like an occupying force, compensating for their conspicuousness with superior fire power.

Unlike a lot of the films I review on this blog, Prime Cut is not expensive or hard to find. Don’t waste any more time, get it and enjoy one of the genuinely strangest cinematic crime offerings of the early seventies.